What Is Hypovolemic Shock: Definition

Hypovolemic shock is an urgent medical condition, which occurs when a rapid decrease of the volume of the intravascular fluid–usually due to severe bleeding–results in inadequate perfusion of the peripheral tissues and, eventually, in multiple organ failure 1,43.

Typical symptoms and signs: a person “does not look right,” is anxious, has pale, cool and sweaty skin and weak pulse, is lethargic and may lose consciousness. 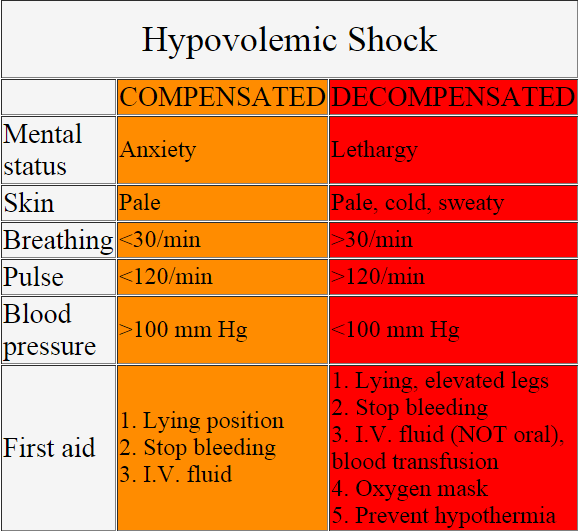 The most common cause of hypovolemic shock in adults is severe bleeding, and in children diarrhea 1.

There are other types of shock and other conditions that may resemble hypovolemic shock:

The term “relative hypovolemic shock” can be used when the volume of the circulatory system increases due to vasodilation, for example in neurogenic shock, and the volume of the blood remains the same but insufficient to perfuse peripheral organs.

Shock is decompensated when cardiac output and blood pressure drop to the point where they can not maintain proper perfusion of the tissues any more. This results in decreased oxygen delivery to the tissues and switch from aerobic to anaerobic metabolism, which results in lactate production and lactic acidosis.

Shock is irreversible when the damage of the vital organs is so extensive that death cannot be prevented despite treatment. The patient can still survive up to three weeks after the onset of irreversible shock 32.

Clinical symptoms and signs may not be present until 10-20% of the total blood volume in adults or up to 30% in infants is lost.

NOTE: In infants, early symptoms and signs of hypovolemic shock are less obvious than in adults 23.

Internal bleeding may not be visible; it can be suspected in high speed injuries, traffic accidents, falls from the height, after stabbing, etc.

When internal bleeding is suspected:

The following is an overview of the usual procedures and it is not meant as treatment instructions.

In a decompensated shock, 100% oxygen should be given by a non-rebreathable facial mask 25.

Immobilization of the neck spine and limbs in a patient with trauma should be done before transport.

The patient should be transported to the hospital as soon as possible.

The first goal in treatment of hypovolemic shock is to correct hypotension 38.

Fluid deficit replacement can start during transport 35,38,40. Fluids, which should be warmed, should be given via 2 large bore i.v. lines. The following fluids can be used 41:

NOTE: Using large amounts of fluid before surgery has been questioned lately 16.

Internal bleeding can be reduced by certain drugs or stopped by an immediate surgery.

Vasoconstrictors–medications that increase blood pressure should not be given before hypovolemia has been corrected by fluids. There is insufficient evidence in using vasoconstrictors in improving survival in the acute phase of trauma 8.

Norepinephrine is released from the nerve endings of sympathetic nerves. It stimulates alpha 1 and beta 1 receptors and causes peripheral vasoconstriction, increases heart rate and contractility and rises both systolic and diastolic blood pressure 32. Norepinephrine as a drug can be used in acute fall of the blood pressure.

Prognosis of hypovolemic shock mainly depends on the volume of blood lost, the speed of fluid replacement and underlying health conditions.