Where is your liver located? 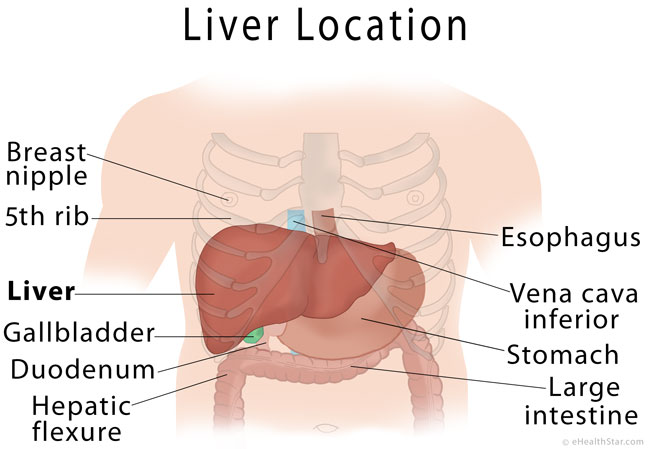 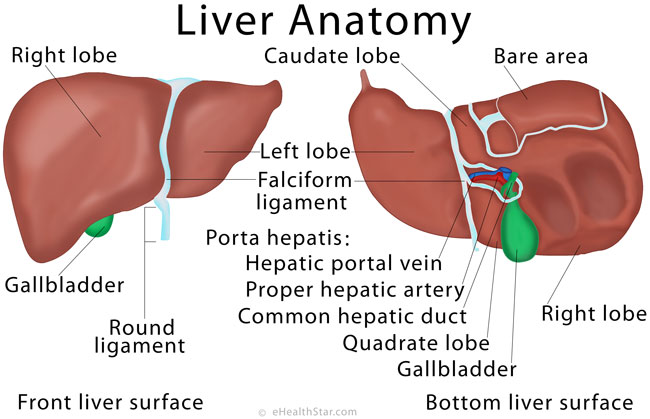 The liver has a shape of a triangular pyramid with the base pointing to the side of the lower part of the right rib cage and the apex pointing to the left breast nipple [1,9]. The liver is encapsulated in a fibrous connective tissue capsule (Glisson’s capsule) and almost completely covered by the abdominal membrane (peritoneum), except in the “bare area” on its bottom [6].

The liver consists of 2 main lobes–the right and left–, each of which is divided into 8 segments [1]. The two main lobes are separated by the falciform ligament, which attaches the liver to the abdominal wall and diaphragm [24]. Two smaller lobes–the quadrate and caudate lobe–are on the bottom side of the liver [1].

The liver has a sharp anterior (inferior) border that separates the anterior and inferior surface; other liver borders are rounded [6].

Hilum or porta hepatis is the central part of the liver through which the common hepatic duct (bile duct), hepatic artery and portal vein enter the liver. 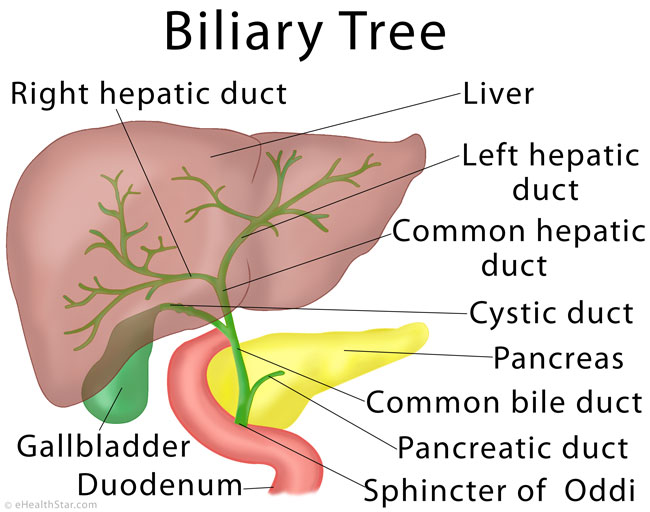 The entire upper (diaphragmatic) surface of the liver is covered by the diaphragm. Above the diaphragm, in the chest cavity (thorax), there is the right lung with the corresponding part of lung membrane (pleura) and the heart within the heart sac (pericardium).

The inferior (visceral) surface of the liver is in touch with the gallbladder, right kidney and adrenal gland, stomach, duodenum and “hepatic flexure”–the area where the right vertical (ascending) colon turns into the horizontal (transverse) colon [1,4,9].

The back liver surface touches the esophagus and the inferior vena cava. 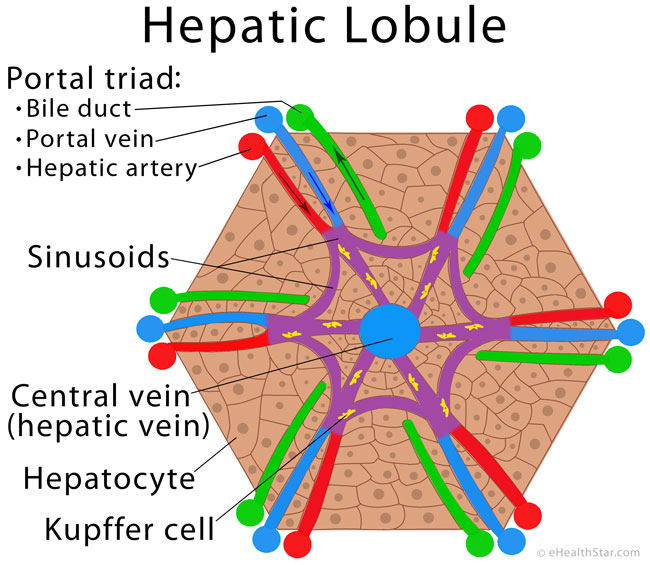 The two most important types of cells in the liver are [2]:

What does the liver do?

The liver produces some substances you need, breaks down harmful substances, drugs and alcohol, removes old red blood cells and some microbes, helps to digest fats, and stores glucose and some minerals and vitamins.

Excessive glucose that enters the blood after meals is rapidly taken by the liver and stored as glycogen (glycogenogenesis) [26]. Up to 100 grams of glycogen can be stored in the liver [7]. Between meals, when the blood glucose levels fall, glycogen is converted back to glucose (glycogenolysis) and released into the blood. The liver can also produce glucose from non-carbohydrate sources, such as amino acids, lactate, pyruvate and glycerol (gluconeogenesis) [11].

The liver breaks down the excessive amount of fatty acids that enter the liver into acetate (beta-oxidation of fats), which can be used for the synthesis of other substances [26]. The liver can also convert the excessive amounts of glucose and amino acids into fatty acids and triglycerides, which are released into the blood and stored elsewhere in the body [26].

The liver produces about 10% of cholesterol that body needs [2,8]. The liver can incorporate cholesterol into lipoproteins and transport it to the tissues. Cholesterol is a precursor of bile acids, vitamin D or steroid hormones: cortisol, aldosterone and sex hormones: testosterone, estrogen and progesterone [28].

The liver handles lipoproteins, such as LDL and HDL cholesterol, which transport fats and cholesterol from and into the liver [24].

Ketones are produced in the liver from fatty acids as an alternative source of energy when there is not enough glucose available for the body cells (in low-carbohydrate diet, starvation or diabetes mellitus).

During conversion of amino acids into glucose or fatty acids, the liver removes amino groups from amino acids and convert them into ammonia (deamination) and further into urea (urea cycle), which is excreted from the body in the urine [10]. In severe liver disease, ammonia, which cannot be efficiently converted to urea, starts to accumulate in the blood and causes hyperammonemia, which can be life-threatening.

The liver produces bile, which is temporarily stored in the gallbladder and then–via the bile ducts–delivered to the first part of the small intestine (duodenum). Bile emulsifies fats and thus enables their digestion and absorption as well as absorption of cholesterol and fat-soluble vitamins A, D, E and K [27].

A severe liver disease, such as hepatitis or cirrhosis, can affect bile production or its delivery to the intestine (cholestasis), which can result in vitamin A, D, E or K deficiency and fat malabsorption with greasy stools (steatorrhea).

The liver produces bilirubin from hemoglobin from worn red cells. Large intestinal bacteria convert bilirubin into stercobilin, which gives a brown color to the stool [2]. In liver diseases with impaired bile production, stool lacks stercobilin, so it has a whitish color.

Prothrombin and fibrinogen are necessary for blood clotting. In severe liver disease, the lack of these proteins increases the risk of bleeding.

Albumins are proteins that help to keep water in the blood. In chronic liver disease, such as cirrhosis, the albumin production can be low, so some water may escape from the blood vessels and start to accumulate in the abdominal cavity (ascites). Albumins also enable transport of minerals (calcium, potassium), fatty acids, bilirubin, hormones (thyroxine) and drugs via the blood.

4. Storage of Vitamins and Minerals

The liver stores the following vitamins and minerals:

The liver removes some harmful substances from the blood and excretes them via the bile [2]. It gradually breaks down some medications, which is why you need to take them repeatedly in order to work. It also breaks down alcohol, which results in a gradual drop of blood alcohol concentration after stopping drinking.

Kupffer cells, which are a part of macrophage system–along with the spleen and lymph nodes–, help to remove worn blood cells, bacteria, fungi and parasites from the blood [2].

The liver has a great regeneration capability; loss or damage of up to 75% of the liver tissue can be completely replaced by healthy liver tissue [5].

You cannot live without the liver. The liver that is irreversibly damaged, for example, due to cirrhosis, can be replaced by the liver from a compatible donor.

A doctor can evaluate the liver size by percussion and palpation. Percussion over the enlarged liver gives a dull sound.

Enlarged liver (hepatomegaly) can be palpated as an abdominal mass below the right rib cage.

One Response to Liver