What is the bile?

The bile is a sticky fluid produced in the liver, stored in the gallbladder and delivered into the intestine, where it aids in the digestion of fat.

The bile in the gallbladder is yellow-green or brown due to bile pigments bilirubin and biliverdin [4].

During diarrhea, the stool can appear yellow or green, because the bile passes through the intestine fast and the bacteria do not have enough time to change its original color to brown.

The bile in the vomit appears green or yellow and has a bitter taste [7,13].

Bile acids are produced from cholesterol in the liver cells. After the connection with the amino acids taurine or glycine they are called conjugated bile acids, and after further connection with sodium and potassium, they become bile salts [2].

The bile physically breaks down big particles of dietary fats into small droplets and thus makes them more digestible; this is known as fat emulsification [1].

Next, the enzyme lipase from the pancreatic juice chemically breaks down fat molecules (triglycerides) into fatty acids and monoglycerides, which can then pass from the intestine into the blood; this is known as fat digestion and absorption [1].

NOTE: The bile does not contain digestive enzymes and it does not digest fats; it only emulsifies them.

The bile also assists the absorption of cholesterol and fat-soluble vitamins A, D, E and K [1].

The bile enables the excretion of wastes from the body via the stool [3,4]:

The bile is alkaline (pH = 7-8), so it helps to neutralize the stomach acid that is delivered to the small intestine with food [3,4].

4. Protection of the Intestine Against Infections

Immunoglobulin A in the bile can fight microbes and thus protect the intestine against infections [3]. 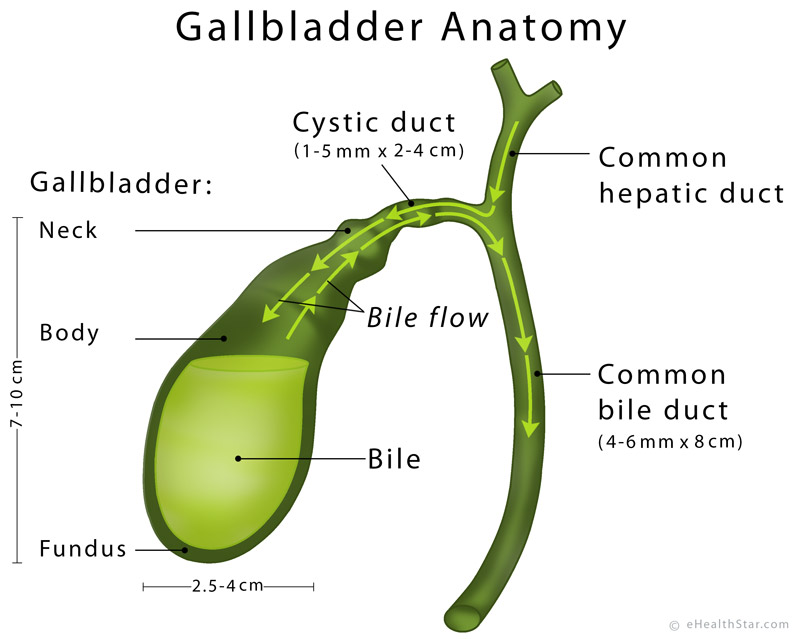 The Bile Production and Secretion by the Liver

The bile is produced in the liver cells and secreted into the small channels between them (the bile canaliculi). The bile flows out of the liver via the common hepatic duct [3] (Picture 1).

NOTE: The bile production in the liver can be reduced due to a severe liver disease or genetic disorder.

The Bile Storage In the Gallbladder

In the gallbladder, the bile is temporarily stored and concentrated [2]. The gallbladder usually contains about 30-50 mL of bile [6].

The Bile Delivery Into the Duodenum

After meals, the gallbladder contracts and the sphincter of Oddi relaxes, which allows the flow of the bile from the gallbladder through the cystic and common bile duct into the duodenum (Picture 1).

Foods that stimulate the flow of the bile from the gallbladder:

Dietary factors that slow down the bile flow:

Similarly, about 50% of the cholesterol secreted via the bile is reabsorbed [20].

Certain drugs, vitamins and minerals secreted in the bile can also be partially or completely reabsorbed.

NOTE: In a disease of the last part of the small intestine or after gallbladder removal, the bile may not be sufficiently reabsorbed and may trigger diarrhea.