What is coccyx (tailbone) and where is it located?

Coccyx (tailbone) is the lowest part of the spinal column. It extends down from the sacrum between the buttocks and ends about an inch (2.5 cm) above the anus [12-p.329]. At this site, coccyx pain appears. 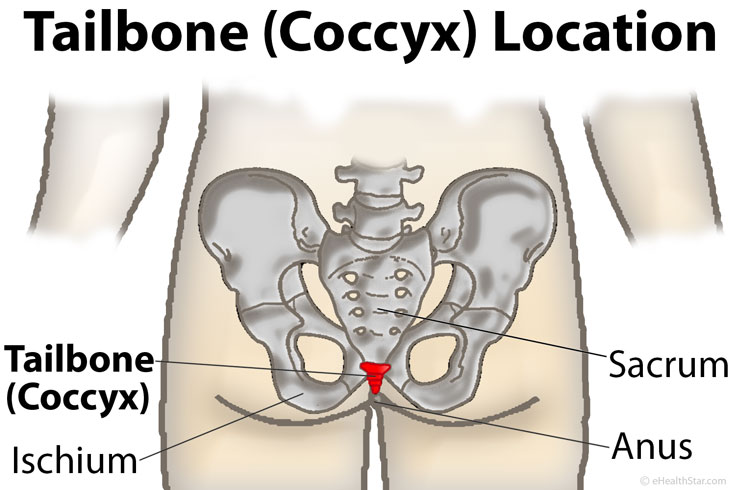 Coccyx has got its name from its resemblance to cuckoo beak (in Greek cuckoo = kokkux) [1]. The anatomical name for coccyx is os coccyx. 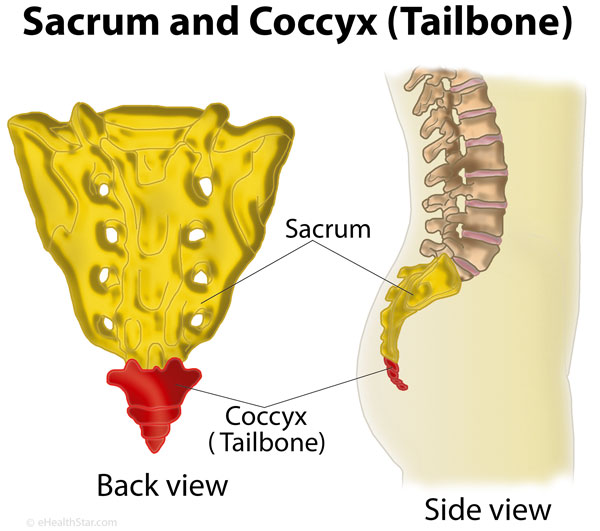 Coccyx assists in weight-bearing when a person is seated, especially when leaning backward [2].

The anterior coccygeal surface serves as the attachment for the anterior sacrococcygeal ligament and the muscles of the pelvic floor (levatores ani) that support parts of the rectum and, in women, urethra and vagina.

The borders of the coccyx give attachments on either side to the sacrotuberous and sacrospinous ligaments, to the coccygeus muscle in front of the ligaments, and to the gluteus maximus muscle behind them.

The joints between the tailbone segments can be true (synovial) joints, they can contain thin cartilaginous discs as in most other parts of the spine or can be fused (ossified) as in the sacrum [7,9].

The coccyx makes a joint with the sacrum via the sacrococcygeal junction [2].

The anterior, posterior and lateral sacrococcygeal ligaments attach the sacrum to the coccyx [2].

The sacrospinous ligament, which connects the sacrum with the spine of the ischium (the lower part of the hip bone), is also attached to the coccyx [2].

The sacrotuberous ligament, which connects the sacrum and the tuberosity of the ischium, is also attached to the coccyx [2].

The anococcygeal ligament or raphe is in the middle of the part of the levator ani muscle that attaches the anus and the coccyx.

Levator ani, which consists of iliococcygeus, pubococcygeus and coccygeus muscle [11]

Muscles attached to the TIP of the coccyx:

Nerves in the Coccygeal Area

The 5th sacral nerves (the right and left root) leave the spinal canal between the sacrum and coccyx [6].

The coccygeal nerves (the right and left root) arise below the 5th sacral nerve and run around the upper part of the coccyx [6].

The pudendal plexus is formed by the 2nd to 5th sacral nerve and the coccygeal nerve [6]. It gives anococcygeal and pudendal nerve, visceral and muscular branches.