Periosteum [from Greek peri = surrounding; osteon = bone] is a fibrous membrane that covers the outer surface of the bones [1,16].

Periosteum covers all the bones, except the kneecap (patella) and certain small bones in the wrists, hands and feet, which are embedded within the tendons [16]. The periosteum also does not cover the cartilaginous parts of the bones in the joints 17,35. The periosteum that covers the skull is called pericranium.

Besides the periosteum, the bones are covered by two other membranes:

The inner, cellular or osteogenic periosteal layer, also called cambium, which has got the name from the cambium between the bark and wood of a tree, is in direct contact with the cortical bone; it consists of progenitor cells that develop into osteoblasts, which produce the bone tissue. The cambium layer is thickest in a newborn and thins with age [16,31].

As a result of periosteal reaction due to an irritating bone or systemic disorder, the periosteum can become several millimeters thick [20].

Endosteum covers the inner surfaces of the long bones. The endosteum is thinner than the periosteum since it contains very few fibers.

Sharpey’s perforating fibers run from the periosteum through the bone to the endosteum and firmly attach both membranes to the bone [34]. They are thin (<40 micrometers) but strong fibers made mainly of collagen and elastin [34]. They are abundant at the sites of the ligament and tendon attachments to bones and in the alveolar bone, from which the teeth grow [34]. Sharpey’s fibers become stronger with activity and weaker with lower blood estrogen levels [34]. 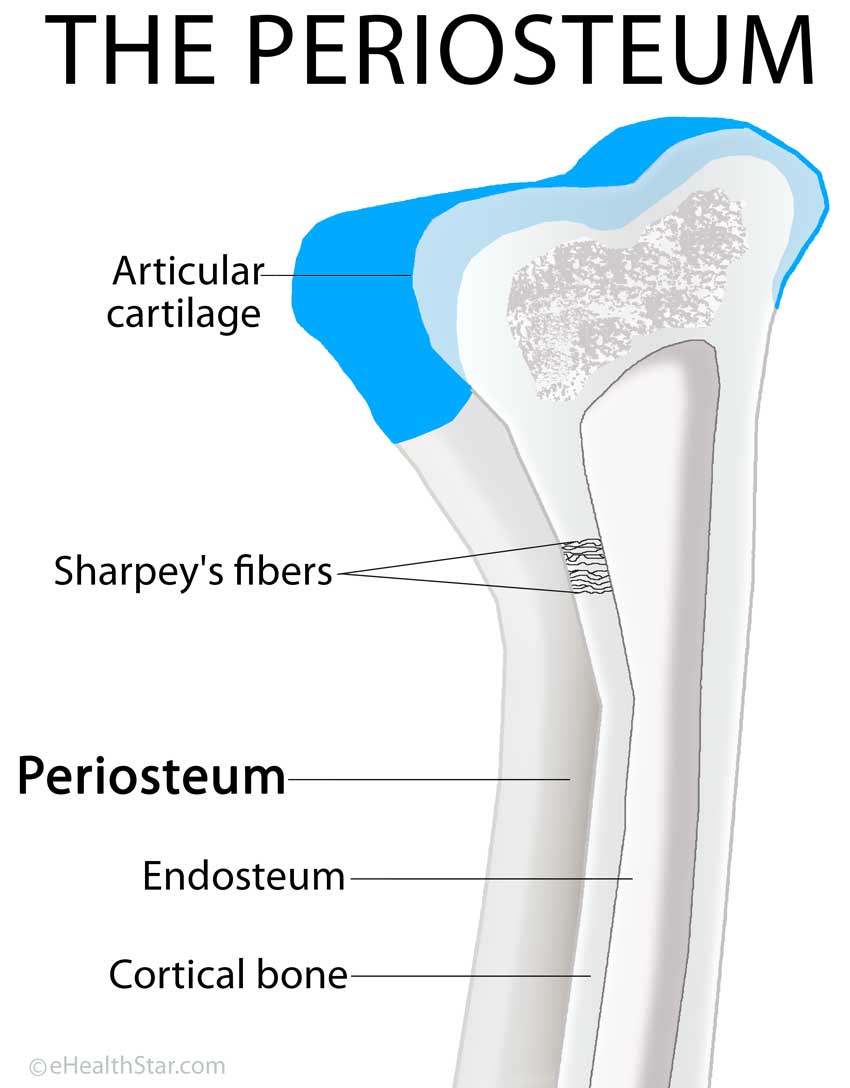 Picture 1. Periosteum location.
The periosteum covers the outer surfaces of the bones,
except in the joints, where the bone is covered by the cartilage.

Functions of the Periosteum

1. Attachment Sites for the Muscle Tendons and Ligaments 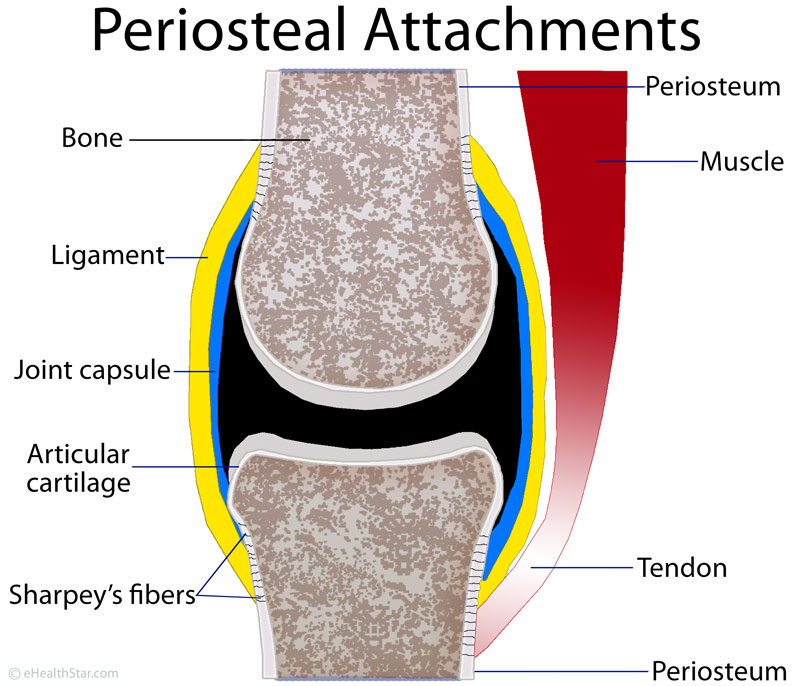 2. Nourishment of the Bones and Muscles

Nerve fibers in the periosteum or bones of the skull and in the dura mater (the outermost brain membrane) may be involved in migraine pain [23]. Periosteal nerves contain substance P, which is involved in pain mediation [15].

In children [1,16], the osteoblasts in the inner layer of the periosteum (cambium) produce new bone and thus enable the growth of the bone in the width or periosteal or appositional bone growth 1,16. Periosteal bone growth, to some extent, probably also occurs in adults [31].

After a bone fracture, the progenitor cells in the cambium develop into osteoblasts and chondroblasts that contribute to the bone repair and healing by forming a soft periosteal callus [1,16,48]. The bone healing potential of the periosteum decreases with age and is greater in long bones, such as the tibia, than in flat bones, such as the skull bones [16].

The periosteum may also contribute to bone wasting (resorption); for example, after a tooth loss, the alveolar bone under the gingiva shrinks [31].

Small bones, like wrist bones, that have only small amount of the periosteum, have spherical growth plates inside them [16].

In the growing males, low blood levels of estrogens are needed for periosteal bone expansion [18].

In certain fractures of long bones, the periosteum remains intact and acts as a hinge — it holds two pieces of the broken bone together [50].

1. Periosteum in the Skull (Pericranium)

Pericranium is the periosteum that covers the outer surface of the bones in the skull.

The inner side of the skull bones is covered by the outermost brain membrane or meninge called the dura mater, which has the periosteal layer, which is firmly attached to the skull bones, and the inner meningeal layer. At certain points, the two layers separate and form canals called cerebral sinuses or dural venous sinuses through which the venous blood from the brain flows.

2. Periosteum In the Eye Orbit

The periosteum in the eye orbit is continuous with the dura mater [5]; it is loosely attached to the bone, so surgeons often elevate it when removing tumors in the orbit to avoid damage of the eye content [47].

A subperiosteal hematoma, usually in the roof of the orbit, can occur after a blunt trauma to the frontal area of the head (a fall or direct blow) [46].

3. Periosteum In the Spinal Vertebrae

The periosteum in the vertebrae is well innervated, which may be one of the reasons for pain during injection of anesthetic for epidural anesthesia [33].

Conditions Related to the Periosteum

A periosteal tear refers to a detachment of a part of the periosteum from the bone at the site where a ligament or tendon is attached to it [40]. It commonly occurs in football players when they suddenly twist a leg or foot. The main symptom is local tenderness and pain during stretching the affected tendon [40].

A subperiosteal hematoma or periosteal bruise is a collection of blood between the periosteum and the bone, usually due to a direct blow to the bone or bone fracture. Symptoms include local pain, a noticeable tender lump and skin bruise within minutes of injury.

Shin splints or medial tibial stress syndrome refers to an overuse injury of the shin area with pain in the lower two-thirds of shins triggered by exercise [6,11].

A periosteal ganglion is a ganglion cyst arising from the periosteum, mostly in adults [12,13,14]. It can develop after an injury and can cause pain, for example, in the wrist [14] or shin.

Periostitis refers to a periosteal inflammation and periosteal reaction to the formation of new bone or bone hypertrophy under the periosteum in response to bone irritation [2,3,17]. The terms are often used as synonyms. Symptoms may be absent or may include pain, tenderness and swelling of the affected limb [21,41]. Causes include shin splints, bone infection (osteomyelitis), vasculitis [26], benign tumors, fluorosis (especially in vertebrae) [20], cancer [21], chronic lung or liver disease and inflammatory bowel disease (IBD) [21]. Main causes in infants include congenital syphilis and physiological periostitis [41]. Diagnosis can be confirmed by X-ray, CT or MRI [3]. 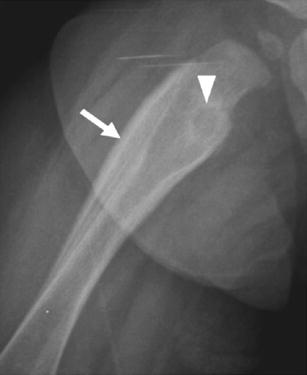 Periosteal necrosis–the death of a part of the periosteum–can result from burns [52], contact with bone implants [53] or osteomyelitis.

Periosteal grafts can be used to treat defects in the connective tissue, bone, cartilage and muscles. This is possible because periosteal cells can differentiate into connective tissue cells (fibroblasts), bone cells (osteoblasts), cartilage cells (chondrocytes) or skeletal muscle cells (myocytes). An autologous periosteal graft, which is taken from the same person in whom the graft is used, for example, a galea-periosteum graft from the scalp [49] or a graft from the shinbone (tibia) can be used to treat: