What is the Spurling’s test?

The Spurling’s test or maneuver is a provocative test to evaluate if the patient’s arm pain arises from a pinched nerve in the neck spine (cervical radiculopathy).

How is the test performed?

A doctor applies a downward pressure on the head of a patient who is seated with his/her neck slightly extended backwards and the head tilted to one side (Picture 1). A doctor should release the pressure as soon the patient feels the pain and should not try to “rate” the pain by sustaining the pressure. 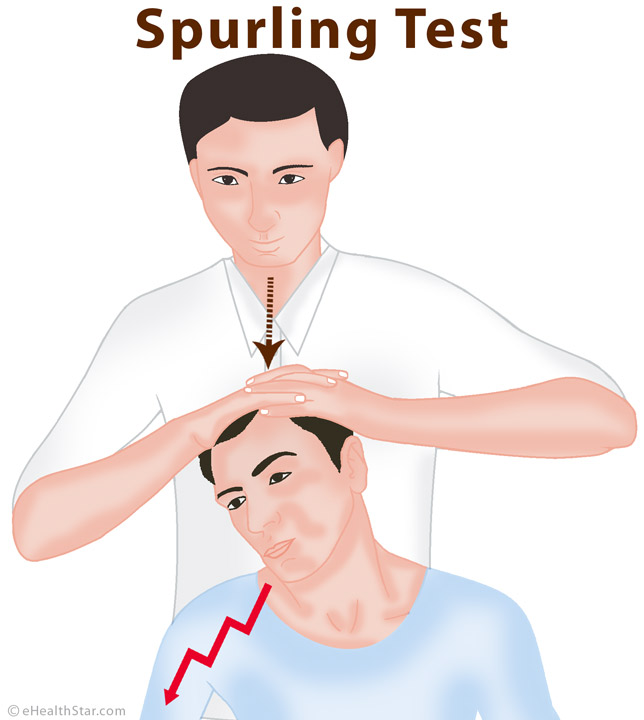 A positive Spurling’s sign means pain in the shoulder or upper arm on the same side to which the head is tilted.

Positive test (pain after applying pressure) is quite specific for a pinched nerve in the neck (cervical radiculopathy) and greatly reduces the probability of other conditions as a source of pain [1]. The test does not seem to be very sensitive, which means it is positive only in about half (30-90%, according to various studies) of patients with a pinched nerve in the neck [1,2,4].

A pain that appears in the neck on the opposite side of that to which the head is tilted is caused by increased muscle tension rather than a pinched nerve.

Negative test (no pain) does not exclude a pinched nerve [1].

Variants of the Spurling’s Test

A patient maximally extends the neck and turns the head toward one side. Pain radiating down the arm suggests affected spinal nerve root in the neck (Picture 2). 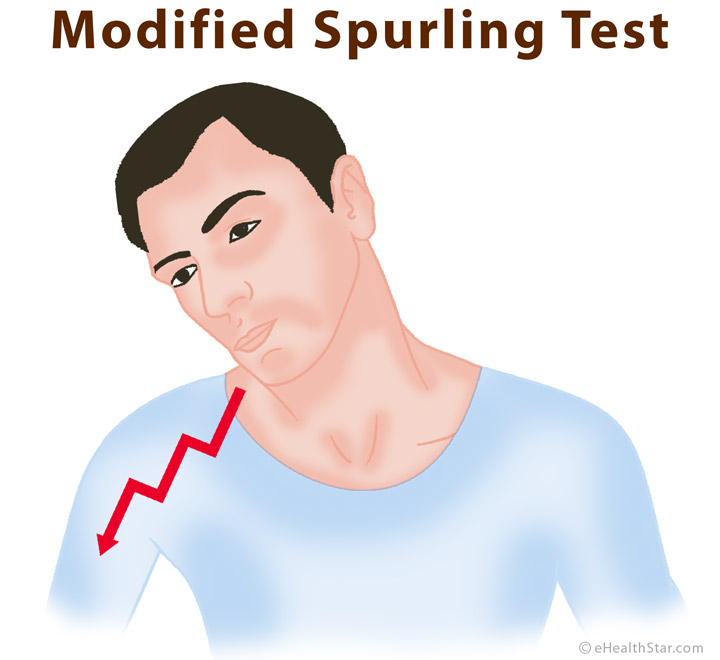 A patient is lying on the back, face-up. A doctor stands behind the patient and puts one arm under his/her chin and the other one below his/her head and pulls it away from the body along the body axis. Pain relief during the test suggests a pinched nerve in the neck [3]. If the patient does not feel pain relief, his/her pain less likely originates from a pinched nerve [3].

A pinched nerve in the neck as a source of pain is even more likely when other tests, such as shoulder abduction test and Valsalva maneuver, are also positive. The Spurling’s test is not used to evaluate pinched nerves in the lumbar spine.

The test should not be performed right after a severe neck injury.