What is the difference between cold and flu?

How to tell the difference between a cold and the flu?

Both a cold and the flu are the respiratory viral infections that most commonly occur during the colder period of the year. 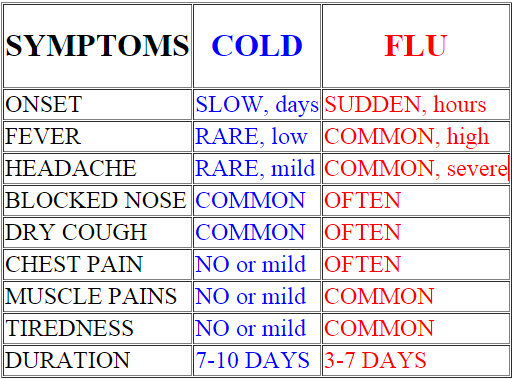 A cold is usually a mild disease limited to the nose and throat, but influenza affects your whole body and often puts you into bed. A severe cold can be hard to distinguish from the mild flu, especially in children. Only laboratory tests can reliably distinguish between a cold and the flu. 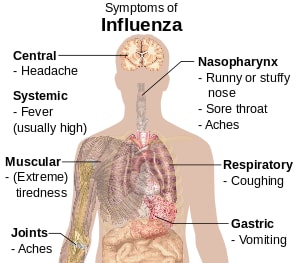 A cold or common cold is medically called acute nasopharyngitis [acute = sudden; naso = nose; pharynx = throat; -itis denotes inflammation] (36). So, a cold is a respiratory viral infection that causes inflammation of the nose and throat.

The term flu is short for influenza, which is an Italian word that originates from the Latin word influentia, which means influence. In medieval times, they used the word influence for the epidemic. Some people also believed that the stars have the influence on the disease (19).

Seasonal or epidemic influenza that appears every year and can affect many people in various regions is a respiratory infection caused by various influenza viruses that affect the nose, throat, lungs, muscles and joints (47).

Flu Vaccines Types and Side Effects

All below vaccines, if you get them once a year, should protect you against flu for the whole. Despite vaccination, there is a small chance you catch a flu infection caused by a flu virus strain not included in the vaccine.

Who should NOT get vaccinated: infants <6 mo, anyone with acute illness with fever, allergy to chicken eggs or severe reaction or Guillain-Barre syndrome to a flu vaccine in the past, who is not at high risk of severe illness from the flu (75).

Other Types of Flu

Influenza viruses that are normally found in pigs are called variant viruses when they infect people. A specific virus influenza A (H3N2v) was first detected in 2011 in the United States, mainly in children. Most infected people were in contact with pigs, which spread the infection by sneezing and coughing. Spread of the virus H3N2v from human to human is not proven (16). You cannot catch this virus by eating properly cooked pork. Severity of symptoms is like in seasonal influenza (H3Nv). As of July 2015, vaccine against H3N2v is not yet available. This type influenza can be treated with the same medications than usual seasonal influenza, that is with oseltamivir and zanamivir (31).

The 2009 H1N1 influenza pandemic was once called “swine flu,” since researchers believed that it has spread from pigs to humans, which probably has occurred initially, but in most cases it spreads from human to human (20). The symptoms of H1N1 influenza resemble those of seasonal flu, but tend to be more severe and more commonly causes death; mortality rates are 1-4% (21,28).

Diagnosis. H1N1 influenza and seasonal influenza cannot be distinguished by symptoms but only by laboratory tests of the secretions from the nose and throat (nasal or throat swabs) (21,29):

What is the swine flu?

Current meaning (as of 2015) of “swine flu” or “swine influenza,” according to the Centers of Disease Control and Prevention (CDC) in the U.S. (56):

The 2009 H1N1 influenza pandemic was initially called the swine flu because it has probably spread from pigs to humans on the beginning, but now it mainly spreads from human to human, so the CDC does not use the term swine flu for this type of influenza any more; however, many other institutions and medical websites still do.

The bird flu or avian influenza is caused by Avian influenza A (H5N1) (22,24) or influenza A (H7N9) virus (26), which can spread from birds to humans, but less commonly from human to human (22). Humans are most likely infected during close contact with live or dead domestic poultry (chickens, turkeys, ducks, geese), their droppings and infected water, equipment, shoes and clothes, but not with properly cooked meat or eggs (22,24). Symptoms of the bird flu resemble those of the seasonal flu, but the bird flu causes much more deaths than seasonal flu; mortality rate can be as high as 60% (22,23). Difficulty breathing, hoarseness and blood in the spit are common.

Diagnosis of the bird flu is confirmed when the virus influenza H5N1 or H7N9 is found in samples of secretions from the nose or throat (nasal or throat swab) within the first few days after symptoms onset; the test used is rRT-PCR Flu Panel (25,55).

Treatment with the antiviral drug oseltamivir or zanamivir within the first two days of symptoms onset, if possible, can reduce the severity of symptoms (22,25).

The terms stomach flu or gastric, tummy or intestinal flu are often used for an infection of the stomach and intestine (gastroenteritis) caused by rotavirus or other microbes, which can cause both stomach symptoms (vomiting, diarrhea) and flu-like symptoms (fever, stuffy nose) (48). The stomach flu is not related to the seasonal flu and is not caused by the influenza virus.

Influenza-like illnesses (ILIs) are defined as diseases with flu-like symptoms (fever >100 °F or 37.8 °C, cough and/or sore throat) that are not caused by influenza viruses (negative flu test) and their cause remains undetermined in further diagnostic procedures (58).

1. Does cold weather increase the risk of common cold and the flu?

According to one hypothesis, you more likely catch a viral infection of the upper respiratory tract in colder months because your nose is colder and thus more susceptible to infections (38). Also, viruses that cause cold and flu survive more readily in lower humidity during the colder months (45,68).

Some researchers believe that exposure to low temperatures does not increase your chance to catch a common cold or flu (11,68). In one study, students who had their feet chilled in cold water for 20 minutes got a cold in the next 5 days in 50% more cases than students whose feet were not chilled (41).

There seems to be no clear proof that dampness and mold in houses increase your risk of getting common cold.

Exercise, diet or enlarged tonsils have also not been proven as a risk factor for a cold or the flu (68).

2. Can you catch the flu from dogs and other animals?

3. What are early and late symptoms and signs of a cold and the flu?

4. Can rash develop in common cold or flu?

5. Is a common cold in kids different than in adults?

6. Does influenza in babies, toddlers, children and adults differ?

Sometimes, influenza viruses cause only a mild infection resembling a common cold. During its course, the infection can become worse and develop into a full blown flu. Other viruses that usually cause a common cold, such as rhinovirus, do not cause influenza, so, in most cases, cold does not turn into the flu.

8. Advice about the diet during a common cold or influenza

The general rule about the diet during uncomplicated infections in otherwise healthy people: eat what agrees with you, do not eat if you do not feel like eating but drink enough fluid to prevent dehydration. Eat light foods that do not irritate your stomach.

One Response to What is the difference between cold and flu?