What is the Valsalva maneuver?

The Valsalva maneuver is a forceful attempted exhalation against a closed airway. It can be used to clear the ears, unintentionally during coughing or a bowel movement or as a diagnostic or treatment aid.

How it is performed

Instruction: Take a deep breath, close your mouth and pinch your nose with the thumb and index finger and attempt to breathe out gently, keeping your cheek muscles tight, not allowing them to bulge out (Picture 1).

If you are using the maneuver to clear your ears and you feel you need to struggle with it, do not use it, because you may damage your ears. 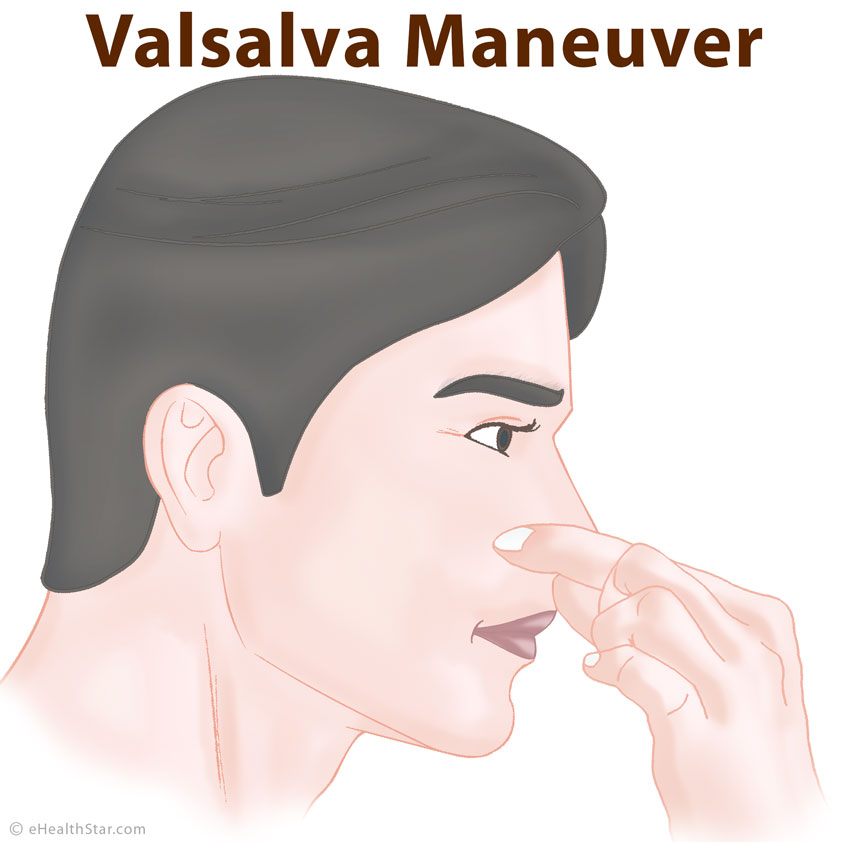 Types of the Valsalva maneuver:

NOTE: Merely holding the breath, without attempted exhalation or physical activity, like in the game “who can hold the breath longer,” is not already the Valsalva maneuver.

Valsalva maneuver increases the pressure in the nose, maxillary sinuses (on both sides of the nose), mouth, throat (pharynx and larynx above and below the vocal cords), Eustachian tubes, middle ear, inner ear [55], chest (intrathoracic pressure), eye (intraocular pressure), within the skull (intracranial pressure), in the cerebrospinal fluid (CSF), in the abdomen and rectum [5,43,51]. 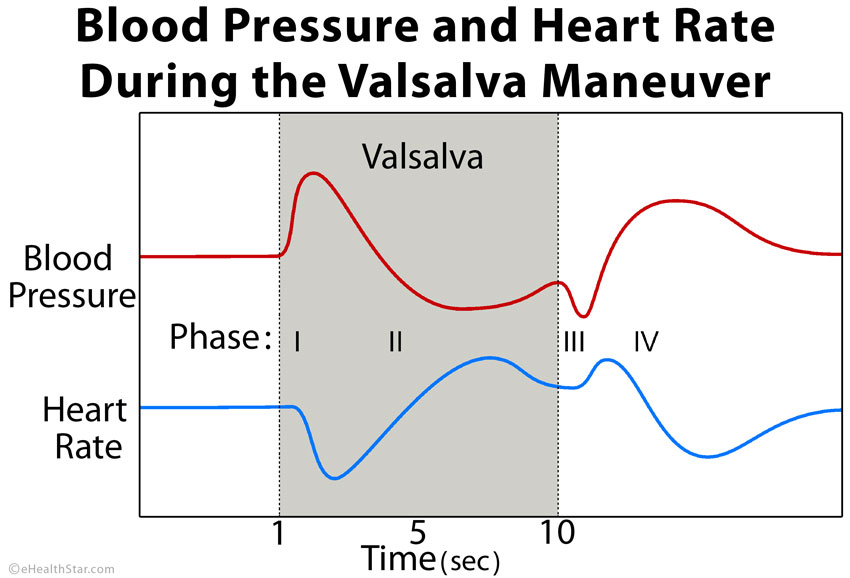 Picture 2. Mean arterial blood pressure and heart rate changes during the Valsalva maneuver.
Fluctuations of blood pressure using 40 mm Hg blowing pressure
are about 20 mm Hg above and below the normal levels [43].

Phase 1. The onset of blowing. The pressure within the chest and abdomen increases and presses upon the arteries in the chest, which results in an increase in mean arterial blood pressure. This activates the baroreceptor reflex, which results in an increase in parasympathetic (vagal) activity and hence in a drop in heart rate. The increased intrathoracic pressure also reduces the amount of blood that comes into the right atrium (decreased venous return or preload).

Phase 3. Relaxation – the end of the maneuver. The intrathoracic pressure decreases, so the intrathoracic arteries widen, which results in a brief drop in blood pressure. At the same time, the venous blood fills the heart.

A variant of Valsalva maneuver is performed against a closed glottis (the space between the vocal cords) with or without a closed mouth and with an open nose. We perform this maneuver unintentionally during coughing, sneezing, gagging, vomiting, bending, sexual intercourse, straining during urination or a bowel movement due to constipation, lifting heavy objects or getting off the bed using arm and upper trunk muscles [5]. The maneuver is also used in sports, such as weightlifting, throwing, rowing, swimming, etc. This maneuver (with an open nose) does not affect the pressure in the mouth, nose, sinuses or ears.

Some coaches recommend using a short (1-2 sec) Valsalva maneuver as a speed accelerator during sprints [63], but there seems to be the lack of reliable studies about its effectiveness.

Valsalva maneuver does not occur during singing [60].

Compulsive Valsalva maneuver has been described in children [73] and individuals with autism [74].

Valsalva as a Diagnostic Aid

Valsalva maneuver can be used as a provocative test to check for:

Valsalva as a Treatment Aid (Benefits)

Modified Valsalva maneuver is used to terminate an attack of abnormal heart rhythm (arrhythmia) called supraventricular tachycardia (SVT); it includes blowing against a closed glottis followed by lying down face up and raising legs with the help of an assistant [2]. According to one Cochrane systematic review, the modified maneuver may be effective in 19-54% of cases and there is insufficient evidence to either recommend it or advise against it in SVT [79].

During pregnancy, the pressure in the abdomen is increased, so pregnant women should avoid exercises that include Valsalva in order to further increase the pressure.

There is insufficient evidence about the benefit of the Valsalva maneuver (purple pushing) during the second stage of the labor [45,46,47,48]. Valsalva during labor may result in a rupture of an eardrum [24].

According to one hypothesis, the Valsalva mechanism may be involved in stuttering, but there seems to be the lack of studies on this topic [18].

For a healthy individual, a single Valsalva maneuver by using a moderate blowing force is probably not dangerous.

Clearing (popping) ears using a violent Valsalva maneuver during a plane flight or diving may cause a damage of the inner ear and may push unwanted material from the mouth into the middle ear [36,55]. The Toynbee maneuver–pinching the nose followed by swallowing–is considered safer [35] and equally effective [77]. Yawning may also effectively clear the ears [36].

Prolonged straining at the toilet can trigger fainting (defecation syncope) [69]. In individuals with both severe coronary heart disease and constipation, but unlikely in healthy individuals, straining at the toilet may trigger a heart attack. This may occur due to a significant drop in blood pressure and heart rate and artery dilation that result from a combination of Valsalva maneuver and irritation of the vagus nerve in the rectum by the pressure of the stool.

Valsalva retinopathy [8] means bleeding in front of the retina (the membrane that lines the eyeball and enables vision) due to Valsalva maneuver, for example, during severe coughing, straining on the toilet, blowing musical instruments (trumpet), bodybuilding, marathon running [64], labor or even pregnancy alone [34]. Symptoms may include temporary vision loss and floaters in the visual field [8]. Individuals with idiopathic thrombocytopenia are at increased risk of Valsalva retinopathy [58].

In one study, long-term (occupational) lifting of heavy weight was associated with increased risk of detachment of the retina [27].

Other Side Effects and Complications

Müller’s maneuver is the opposite of the Valsalva maneuver and includes forced exhalation followed by an attempted forceful inhalation with a closed mouth and nose or just with a closed glottis.

The test can be used to evaluate weakness of the soft palate and throat walls in individuals with obstructive sleep apnea [19]; the test is considered unreliable [20].

The reversed Valsalva maneuver can also be used to equalize the pressure in the middle ears in individuals with patulous Eustachian tubes.